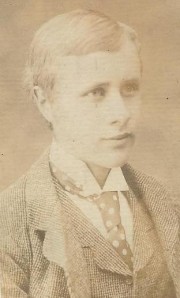 Arthur John Bliss (1862-1931) was born the eldest son of Rev William Bliss of Oxford and Rome and worked as a mining engineer in both New Zealand and South Africa. He, along with his 7 brothers, was educated at Stonyhurst. Their father told them that he could only afford for one of them to go to university, and each brother in turn gave up his opportunity for the next brother in line. In the end, none went. He took early retirement due to ill-health and had been deaf from an early age. He started breeding irises in about 1902, when he was 40, while living in Kent.

He moved to Morwellham Quay in Devon in 1912 and grew his irises on an allotment there. He also bred gladioli and daffodils. In fact it was recorded years later that “I love the Daffodil even more than the Iris”, but it was for his irises that he was best known.

His brother T. Stephen Bliss lived nearby as he was agent for the Duke of Bedford and it was presumably for this reason that he moved to Devon. (Iris ‘Susan Bliss’ was named for Stephen’s wife). Luckily the soil and environment seemed to suit irises well and he lived there for the remainder of his life. His extended family were very fond of him and he was an excellent correspondent to many of the renowned plant breeders of the day. He wrote numerous articles for gardening magazines and encouraged the development of iris societies both in England and the USA. He studied genetics and brought a very scientific approach to plant breeding with meticulous record keeping, planning his crosses in advance and for years ahead to create a particular type of flower. His stock books recorded every cross since 1902, showing what he achieved with each and whether it was what he expected or not. He recorded descriptions of every seedling that flowered, though by about 1918 found this too onerous and only described those worth growing on trial. What a goldmine of information these stock books would be if only they were still available! Family legend says that he recorded all his crosses in chalk on the floor. He felt that careful study and selection was the key to success. In 1922, for example, out of 473 seedlings that flowered, he kept only 4.

In the 1925 British iris Society Bulletin no 2, R S Sturtevant writes: “Mr Bliss started with a scientific study of the origins of the common squalens, neglecta, and amoena types and this led on to the creation of garden varieties by carefully planned breeding experiments. To anyone at all familiar with the vagaries of Iris genetics the results obtained from commonplace parents by his ‘progress breeding’ place him above all other breeders who may, somewhat by chance, produce an occasional fine variety.”

He aimed to breed a crimson iris and a plicata with a golden yellow ground. There was nothing of the sort at that time and he wanted to break new ground. He also tried to improve on varieties already in existence, developing substance and broadening the segments. He didn’t succeed in either of the first two aims but moved the development of iris genetics forward significantly. It has been arguably said that without him and the Dominion race, modern irises would not exist. 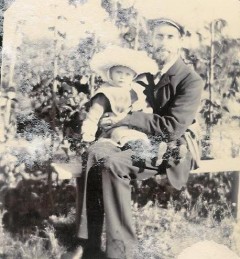 A J Bliss with his neice Phyllis

There is little, it seems, recorded about the man himself, though much on his irises and his support for the Iris Society, the development of registration and the setting up of both the American Iris Society and the British Iris Society. In the AIS Bulletin in 1923 R S Sturtevant wrote: “Though few of knew the man himself…..he was a man who clearly lived unto himself alone, shut away from many contacts by his lack of hearing if not by temperament and yet delightful to one who knew him so well as his little niece Phyllis and a most charming correspondent to many.” After he died, a brief article in AIS Bulletin no 39 commented that even correspondence with him “revealed much of the man himself; his simplicity, generosity of spirit, his eternal patience and wide tolerance for the foibles of others”.

In 1949 John C Wister, the first president of the American Iris Society suggested that it was Dykes that inspired Arthur to start breeding irises by involving him in the controversy about the authenticity of the supposed species amoena, plicata, neglecta and squalens . It was Phyllis, daughter of his brother Laurence who helped him, and ‘discovered’ Dominion. “I was at that time so engrossed in my aim of raising a crimson iris that I suppose any one not ‘red’ received scant attention. It was my little niece who really discovered it – confidently affirming one day that it was the best iris I had.” Elsewhere he refers to Phyllis, at age 5 being his “first and only assistant, and to her unerring judgement in selection no less than her sage advice and encouragement.” Dominion was deep purple, had a stout stiff stalk, a large flowerof great substance, flaring almost horizontal velvety falls and wonderful texture.Nurseryman R. W. Wallace (who had just introduced Foster’s seedlings) came to see it. “He also thought it was the finest iris in the world and said so in his catalog,and to be sure that his customers would be properly impressed, he asked for it in 1917 notthe usual 4 or 5 shillings, but 5 pounds! [probably about £100 today]

“It was this Iris, plus those I have just mentioned, that precipitated the Iris furore in Europe, and the flood of introductions from Bliss, Perry, Vilmorin, Millet, Denis and Cayeux and others in the decade 1920 to 1930”. (JC Wister: A Little Iris History; AIS Bulletin 1949).

In fact he introduced more than 150 cultivars. The best known of these was of course ‘Dominion’ and irises of the Dominion Race will be found in the genealogy of many newer cultivars. The irises won many awards, including a silver cup in 1922, possibly for ‘Citronella’, a striking variagata. As irises have developed over the last 80 odd years, many of the older cultivars have been lost, even though they were instrumental in the development of the iris as it is today. For many years older varieties were discarded as newer, larger flowered varieties were developed. There are many people now who prefer the older more delicately flowered irises which often stand up better to poor weather.

In 1930 P Murrell wrote the editorial for the Iris Society yearbook. He states: “Let us consider very briefly what Bliss has actually done. He gave us, in his original Dominion race, irises which were something definitely new and better, a complete breakaway from the old varieties and of which Dominion itself set a standard of quality for everything else which has been raised since it appeared. Not only this. These new varieties provided new material for other raisers to work on, and to which many of them are indebted for their own achievements”. “I am asking the editor to publish my note as a small tribute to this modest and retiring English gentleman, who, working with few facilities in a remote corner of Devon, has accomplished so much. He is the master in whose footsteps we are all following”. He was awarded the Foster Memorial Plaque in 1930.

Another quote suggests that he became quite eccentric: “He was then (1929) in his seventieth year, still tearing around the countryside on a motor bicycle, though at some peril as he was very deaf. He was living in the utmost disorder in a crowded little cottage on the river Morwell, his main room littered with the apparatus of a curve-calculating machine on which he was working, and with the paraphernalia of living. He had little regard for his clothes, the casual condition of which has prevented my wife from further saying I was the worst dressed gardener she has ever seen. Of course Mr Bliss was a bachelor. His garden and particularly his records were, however, models of neatness and of meticulous care.” (Sydney B Mitchell Iris Society Yearbook 1947) Even in 1919 he could have been described as unconventional: “Mr Bliss was lame from a sprained ankle and very deaf, and the two made him appear much older than he was. He lived, apparently, in an atmosphere of confusion. His ‘office’ in the little inn where he lived, was a grand piano piled high with notebooks of records of his crosses, and his ‘garden’ was a rectangle 100 by 200 feet., filled ….. with his irises without apparently space to put a foot down, no paths, no space even between rows”. “Mr Bliss was a delightful host, and the little valley of the Tamar River seemed to me just delightful and just unbelievably beautiful. It was not only beautiful but it supplied strawberries and Devonshire cream such as I have never seen again.” (JC Wister; Iris Society Yearbook 1946)

He considered writing a book, and had got as far as scoping it out by 1930. In a letter to Mr John Beauchamp dated 26th June 1930 he says:

“The doctor tells that it is not serious now but would be if I went on and that I must rest for at least six months and thereafter not work more than six or eight hours a day (I have been working fourteen hours a day for two years). I can do such work as writing even now and during the winter I did think about the book and got so far as to plan out its scope. I was rather appalled at the amount of work it will entail in some ways as I shall have to collect and coordinate my results in Daffodils and Iris (I have done so for Gladioli as it was necessary for an article I wrote for the Gardener’s Chronicle about 1915).” He never got to complete the book.

In another letter in March 1914, in which he was generally discussing family history with his distant cousin Christine Burrows, he tells her a little of himself: “ I left Oxford 2 or 3 years before the rest of the family, and going out to New Zealand [1881-89] and subsequently to South Africa. I am now engaged – in a more or less amateur way – in plant breeding, raising new varieties of flowers, which seems a most appropriate occupation for one with our motto ‘Quod Serveres Metes’ [As you sow, so shall you reap]”

He died of pneumonia in 1931. In his obituary Mr Eden Phillpotts for the Times writes in 1931: “A very rare and distinguished personality is lost in the passing of Arthur John Bliss. In the full tide of his original work, and he leaves not only horticulture the poorer, but countless friends who loved him for himself alone. Bliss was a unique spirit and, despite his affliction of great deafness, preserved a steadfast cheerfulness and contentment, never allowing his affliction to come between those he esteemed and willed to pleasure or instruct.” 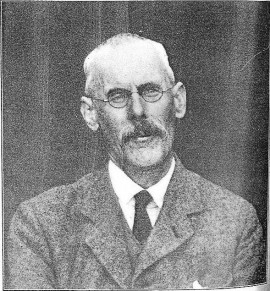